Rally for What’s Right in Sanford

Posted on March 23, 2012 by OrlandoCommunityNews 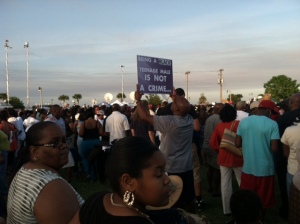 Sanford, Florida – Residents here must have mixed feelings. On one hand, they love their hometown and brag about it. On the other hand, their temperatures boil over the shooting death of unarmed 17-year-old Trayvon Martin on February 26 in their ‘hood at the hands of an armed crime watch volunteer, George Zimmerman, who has not been arrested. Sanford Police officials said in reports that Zimmerman told them that he shot the teenager in self-defense. Many believe the 9-1-1 tapes, released a few days ago by police, contradict Zimmerman’s statement to police.

But still, Sanford residents and people from Central Florida and all over the country, including Trayvon’s parents and other family members from Miami, showed up by the thousands with their children and signs in tow, rallying in downtown Sanford (just north of Orlando) for justice for Trayvon by the arrest and indictment of Zimmerman.

Amid chants such as “No Justice, No Peace,” there were prayers for families, the Sanford community and children by local pastors. One spoke about how bad things look now and how God had the power to turn things around for good. In fact, rally organizers announced reports that the Sanford Police Chief had stepped down temporarily because “he has become a distraction in the investigation.”

The signs in the crowd revealed the hearts of the many of the people: “Why?,” “Being A Black Teenage Male is Not a Crime” and “Justice for Trayvon and all Who Came Before Him.”

Perhaps the key part of the rally was the attendance by national leaders, several of whom spoke passionately about the purpose of the rally and desires of the community.
“All I want is an arrest,” said U.S. Representative Corrine Brown, whose third district includes Sanford. “I don’t care who does it, as long as there is an arrest.”

Trayvon’s family attorney called the rally a movement which has gained the support of people all over the world, with the help of national media entertainers such as Michael Baisden, Tom Joyner and Al Sharpton.

Sharpton, who showed up to the area hours after getting news that his own mother had passed, took the mic and said Zimmerman should have been arrested the night of the shooting. Sharpton introduced Trayvon’s parents, who spoke briefly about who their son was.

The teenager’s mother said this is not about a black and white thing. This is about a wrong and right thing.

What happened to their son was wrong and the fact that no one has been held accountable for his death is wrong.

Judging from this rally, people from all walks of life, all over the world are stepping up to the plate to help this family fight for justice. Rally organizers collected donations to help the cause.

Editor’s Note: This article is from the viewpoint of the writer, Trish Martin, who is from Sanford, Florida. All comments are welcome, either here or at her email address: triciamartinfl@gmail.com. Thank you.

Founder and Editor of Orlando Community News and freelance writing service. Lover of God, Auto Finance-Sales Professional, “Mese” baby, Proud Aunt
View all posts by OrlandoCommunityNews →
This entry was posted in Community news that can help. Bookmark the permalink.

1 Response to Rally for What’s Right in Sanford