Posted on January 8, 2019 by OrlandoCommunityNews

January 8, 2019 (Orlando) – When voters in Florida overwhelmingly voted Yes on Amendment 4 last November, they spoke loud and clear: People convicted of certain crimes who have done their time and fulfilled their responsibilities to the court should have their voting rights restored immediately.

Today, in Orange County and every county in the state, registration opened for new voters, including former convicted felons who are eligible to vote pursuant to the terms of the enacted amendment (from the county’s elections office website.)

Anyone affected by the amendment may want to register TODAY. The urgency is because incoming Florida Governor Ron DeSantis had said recently in news reports that Amendment 4, which was approved by 64.6 percent (or 5.2 million) of Florida’s voters, shouldn’t go into effect until state lawmakers pass some type of “implementing language” in a bill that he would need to sign (Tampa Bay Times). That could delay the registration process by at least two months (when the legislative session starts). The domino effect: It may prevent many people from voting in city elections.  City elections normally take place in the first quarter of the year. (For example: Some cities in Orange County have their elections in March.)

An elections office spokesperson said anyone who believes they have met the requirements of the amendment can come down to the office and complete the registration form with their signature, which will be kept on file.

Online registration is available through a State of Florida website. The website requires state drivers license or identification card information, as well as other personal information. Note: the signature on the I.D. provided online will be kept on record, the county elections office official said. (https://www.registertovoteflorida.gov)

So if you obtained your driver’s license or I.D. card years ago – as a teenager for example, your signature is probably outdated. (Just like your picture!) 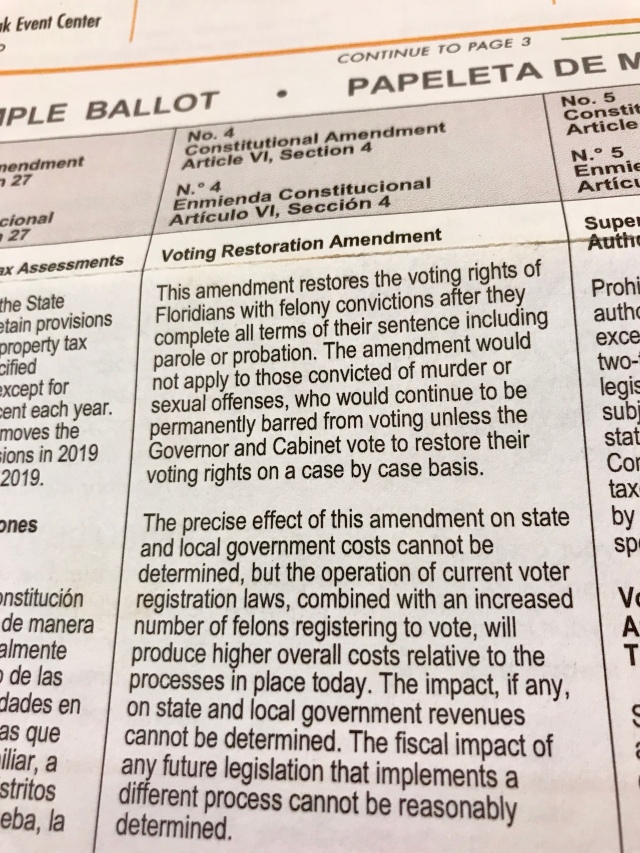