Posted on March 8, 2018 by OrlandoCommunityNews 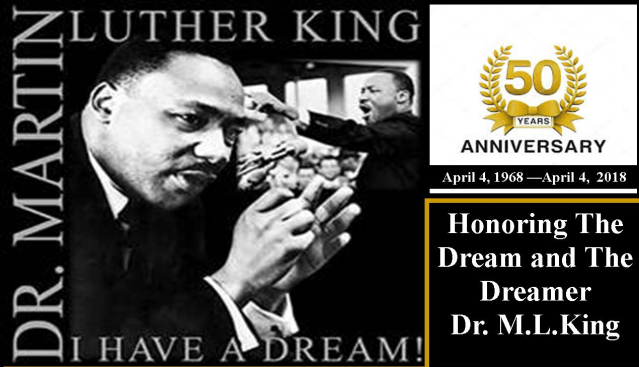 Soon it will be 50 years since Dr. Martin Luther King Jr. was assassinated in Memphis, Tennessee and people around the country will pause to honor the civil rights leader’s life.

Organizers plan a tribute through creative arts, starting at 7 p.m. Admission is $10 for adults and $5 for children under age 16.

“Hope to see you at this great event as we remember and pay tribute to our beloved Dr. Martin Luther King Jr.,” said Michael Kimbrough, executive director of the performing arts center.

“We will honor Dr. King with recitals of some of his famous speeches, quotes and sermons…The speeches will be mixed with dance, poetry and more.”

Over the years, young people, including a younger former President Barack Obama, have been inspired by King.

Leader of the civil rights movement since the mid 1950’s, King was assassinated in Memphis, Tennessee, on April 4, 1968, an event that sent shock waves reverberating around the world.

King was known worldwide for his impassioned sermons and speeches and nonviolent protests to fight segregation and achieve significant civil rights for African-Americans. Founder of the Southern Christian Leadership Conference (SCLC), King also spoke out publicly against the Vietnam War and formed a coalition of poor Americans  – Black and White – alike to address such issues as poverty and unemployment.

On April 3, 1968, King and other SCLC members were called to Memphis to support a sanitation workers’ strike. He gave what would become his last sermon at a local church that evening and the next evening he was fatally shot. He was rushed to a hospital, where he was pronounced dead about an hour later, at the age of 39. He was married to Coretta Scott King and the couple had four children. Several months later, authorities arrested James Earl Ray, who was later charged and convicted. No testimony was heard in the trial, Ray died while serving his 99-year sentence and controversy still surrounds the assassination of King.  (Source: The History Channel, history.com)

Founder and Editor of Orlando Community News and freelance writing service. Lover of God, Auto Finance-Sales Professional, “Mese” baby, Proud Aunt
View all posts by OrlandoCommunityNews →
This entry was posted in Community news that can help. Bookmark the permalink.
Loading Comments...
%d bloggers like this: