Posted on October 28, 2012 by OrlandoCommunityNews 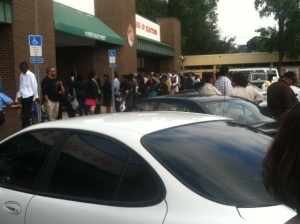 People stood in line outside the Orange County Supervisor of Elections Office Sunday, waiting to cast their ballot at the Souls to The Polls event.

Orange County, FL (October 28,2012) — Some came to vote in person. Some came to vote by turning in their absentee ballot. Some brought other people to vote. Others just showed up to support the effort. A few came to document and report what was going on.

Local pastors organized and got their church members out in huge numbers, to vote early, in person at the Orange County Supervisor of Elections Office.

Around 1:30 this afternoon, after many morning worship services ended, the church members converged on the grounds of New Covenant Baptist Church of Orlando on Rio Grande Avenue to take part in the “Souls To The Polls” effort,  sponsored by the African-American Council of Christian Clergy.

The group rode together in limousines, cars, buses and vans about five miles east up Kaley Avenue near the elections office. They parked and then walked a few blocks to get to the  elections office.

Willie C Barnes, president of the clergy organization, estimated that there had to be more than 1,000 people at the event. No word yet on how many people actually voted either by electronic voting machines or by absentee ballots.

Barnes, pastor of Macedonia Missionary Baptist Church of Eatonville, said he was pleased with the turnout and said it got rid of attempts to stop the effort that is normally held on the Sunday before General Election day.

That is why this effort is so significant.

Florida has allowed early voting (at designated early voting locations) throughout the state since 2004. Early voting started 15 days before and ended on the second day before the election. Historically, that last day for early voting was the Sunday before the General Election, when pastors in the Black community would have their “Souls to the Polls”  event.

Last year, Florida’s election laws changed with House Bill 1355. A part of the bill cut the number of early voting days from 14 to 8.

The State Representative who sponsored the bill, Dennis K. Baxley, R-Ocala, said in a recent CNN special on the topic said getting rid of that Sunday would give election supervisors more time to tabulate votes.

Opponents of the new law say it was created to suppress the minority vote. Reports after the 2008 General Election say early voting by minorities in large numbers helped President Barack Obama win the White House.

Rep. Baxley suggested during the CNN special that organizers just have the event on the Sunday before.

Well, throughout the state, they did and early reports show that people turned out to vote in large numbers.