Posted on June 22, 2012 by OrlandoCommunityNews 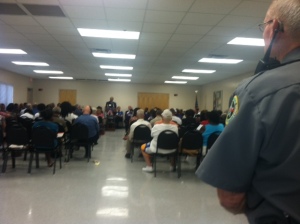 A few hundred residents, mostly from the Pine Hills community, made up what organizers called a record crowd on Thursday night, attending the annual Candidate Forum, sponsored by the Pine Hills Community Council and Robinswood Homeowners Association.

Nearly 30 candidates running for nine different local and state offices were on tap to introduce themselves, talk about why they decided to run and answer anonymous questions from the audience.

During his presentation, Orange County Sheriff Jerry Demings said over the past two or more years the crime rate in Pine Hills was reduced overall by 27 percent. One of his challengers said Pine Hills is a community divided by how it is served by the sheriff’s office and he wants to change that.

“Pine Hills should have its own substation, with deputies who live here,” said John Tegg, one of the three candidates running against Demings.

To the shock of many audience members, one candidate for Orange County Tax Collector, Jim Huckeba, said he was running mainly to eliminate the position altogether, saying it was an administrative position that cost more money annually that it should (more than $150,000 a year).

The candidates also shared their ideas on everything from streamlined process for renewing driver’s licenses (kiosks), customized hours for customers needing to do business with the Clerk of Court to lowing rent costs for the Orange County’s Property Appraisers office in downtown Orlando, finding jobs for veterans (and ex-felons who have ‘paid their debt to society’) and revisiting the effectiveness of the F-CAT.

Several residents in attendance, including one woman who has lived in Pine Hills for 46 years, said they thought the forum was good, saying it gave them a chance to actually meet the candidates running for office. “Often you see their names on the ballot and you have no idea who they are and what they stand for,” one of the residents said.

Candidates in attendance include:

Voters will choose candidates for many of these positions during the Aug. 14 primary election. If you are not registered to vote or if you need to make any changes to your registration, you must do so by July 16 to vote in that primary election.